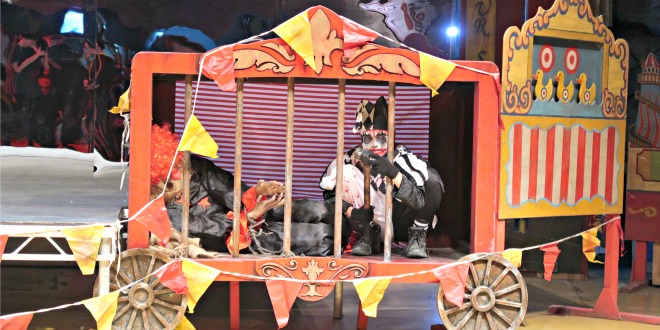 After attending last years Fright Nights at Thorpe Park, we were excited to head back again this year. I think Hubby was definitely more excited, I get a little apprehensive at the unknown. Thorpe Park Fright Nights 2018 has 8 Scare Mazes, 2 Scare Zones, 2 Horror Attractions and 1 Escape Room. This blog post is a little run down of our experiences and thoughts on the Fright Nights.

Firstly I do want to apologise for the photo quality in this post. As you can imagine I had poor lighting for the night time event. I was also very in the moment of being terrified and filmed most of it which is in the video below. As such pretty much all of my photos are snippets taken from the videos I captured. Sorry!! Hubby and I arrived to the press preview event super early. It was hilarious to watch all the other bloggers and vloggers taking photos and talking as everybody waiting eagerly for the gates to open and unleash the scares. We were definitely thrown in the deep end and greeted by scare actors whilst crossing the bridge onto Thorpe Park island. A vampire waitress and a flame thrower. That was definitely a spooky start and a great way to get the adrenaline pumping. It was also clear that they were going to pick on me once again… We had a quick bite to eat whilst the celebrities arrived on the red carpet. I won’t lie, I didn’t see one celeb I recognised and am definitely not one to follow that sort of thing. Food was my top priority. After filling our belies, Hubby and I headed into Thorpe Park to start our evening. There are two official scare zones at the Fright Nights this year. Last year the Big Top has its own scare maze, this is not there this year, but the Big Top: Showtime scare zone is in the initial entrance dome at Thorpe Park. The scary clowns and circus characters were out roaming the park at various places during the press launch.

The second scare zone is Terror at Amity High which is located near Stealth. There’s a few very enthusiastic cheerleaders, the leathered up Grease style men and the American Football lads too. All with fangs. There isn’t a scare maze near this scare zone so you’d only really come across it if you were going to ride Stealth. Throughout the whole Fright Night event we felt that Thorpe Park had really upped their game with scare actors. They are allowed to touch you but you can’t touch them. Obviously they won’t hurt you but having them so close, and in some cases stroking your hair in the pitch black, is rather creepy. They really set the atmosphere and are all very in character and terrifying.

Moving on to the scare mazes and I’ll explain them each separately in no specific order. All the mazes can be found if you walk left, clockwise, around the edge of Thorpe Park. Last year they had one separate near the ????? ride but this year they are all grouped together which makes finding them super easy. Although Containment is where it was last year, underneath the tall water slides.

Walking Dead: Do or Die? It’s located where the Big Top was last year so was naturally the first on our list as it’s closest to the restaurant we ate in. On our run through there was a little confusion about how many people to let in and the recommended 15 felt far too busy and we ended up right at the back so missed whatever was happening on the bus. The maze itself was great though. We love The Walking Dead so it really felt like we’d been transformed into that world for a few minutes. Lots of zombie walkers around and angry Sanctuary members wanting food, which apparently we were… It was great fun and definitely jumpy more than terrifying if that makes sense. This is a scare maze. Blair Witch was one of the mazes that had me most on edge. We were lead through bushes where there were scare actors everywhere ready to jump out on you or grab you through a bush. It was the thing nightmares are made of. The props and scenes created were fantastic. Nowhere was safe and the actors made really creepy animal noises. Dead Creek Woods was a maze in a wooded area just like Blair Witch, only with more open spaces. The actors in here had all been infected and were definitely trying to tell a story. They were really good and set the scene perfectly. There was even a chain saw coming right at you at one point. Hubby and I loved it! This has definitely got to be the worst scare maze of Fright Nights this year. We weren’t allowed to film so I can’t show you it but basically you had to put a bag over your head, your right hand on the person in front and your left holding onto a rope to guide you round the maze.

It’s pitch black with the hood. Your senses go wild expecting something to happen but nothing does. There’s a few ups and times when you need to crouch down.

I think there should have been more actors jumping out at you or more obstacles to navigate. We left a little deflated. I can imagine it being quite terrifying for claustrophobic people though. Platform No 15 hasn’t changed from last year. You are following a story. There’s a lot of walking with not many scares in this one. The little haunted house is great and really smells horrid so that sets the atmosphere really well. There’s also a long pitch black tunnel that seems to go on forever. It’s a really good maze especially if you’ve never done it before, but I definitely think it needs more scare actors to jump out at you, especially in the dark tunnel. Saw: Alive is quite a quick maze. It’s over and done with rapidly but it has lots of areas to make you jump. It takes you through different scenes from the famous Saw movies and if you’ve watched them before it makes you feel rather nervous. I like this maze, it hasn’t changed from last year but it’s still a good maze to get your adrenaline pumping. Hubby and I are huge TWD fans so this was really up our street. The actors are amazing in this one, the sets are so cool and well thought out and it takes you through various parts of the show. Your heart races and it’s so creepy having zombies so close to you. One of our favourite mazes. Things We Didn’t Do:

Screamplexx Cinema 4D – This was a series of short 4D horror films being shown. Hubby and I didn’t want to waste any time to complete the mazes so we skipped this attraction.

Containment – We did this last year and they had quite a few technical faults. I’m assuming they’ve ironed those out this year, you have to book tickets for it. Essentially it’s the escape room, you have to solve a series of puzzles to unlock your way through. It was actually really good in parts and the scare actors were great in each room last year but it just didn’t appeal to us this year so we skipped it.

The Rides – They have the big rides open during Fright Nights. After eating and drinking we didn’t do any of the rides and focused on the mazes. I can imagine it being rather spooky riding Stealth in the dark! We had such a good time at the Thorpe Park Fright Nights. We’ve experienced the Halloween Horror Nights in Universal Orlando two years ago, and this is so close to being that standard of thrills. We absolutely love going and it’s a great way to celebrate our wedding anniversary as they fall so close to that.

The entrance to the scare mazes are included in your entrance price to Thorpe Park. You can buy fast passes to skip the queues. The only maze I’d say to avoid is the Vulcan Peak but other than that, you’ll have a scaretastic time! Oh and definitely not recommended for young children.

Watch our walk through video, it’s a long one…