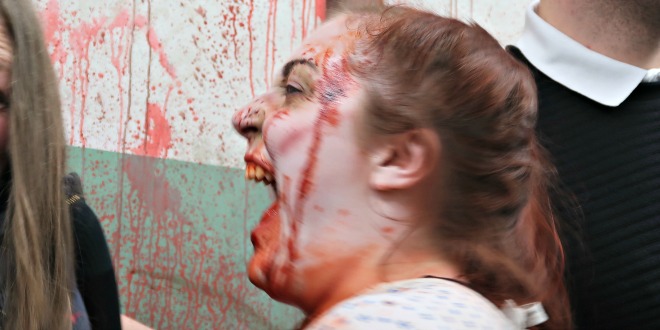 Amongst the chaos of our house move (I know you’re bored of me saying it by now) we had managed to take a few hours break to experience the Thorpe Park Fright Nights 2017. We had been invited to the media event which happened to fall quite nicely on our wedding anniversary and my 25th birthday. In the lead up I watched many YouTube videos of the Thorpe Park Fright Nights. This heightened my nerves for the evening but I also felt super excited. We’d done the Horror Nights in Orlando and had the best time so I was eager to experience a UK version. Hubby and I arrived ridiculously early as the anticipated traffic was not there meaning our journey was very smooth. After what felt like forever waiting for the gates to open and then queuing a little bit like cows going for milking, we managed to find ourselves in the restaurant. Thorpe Park had put on a buffet style meal to grab before heading to be terrified. There are six scare mazes in total. All have live actors inside ready to terrify you. The sun was beginning to set giving the correct atmosphere as we wandered round Thorpe Park to find our first scare maze, The Big Top. Now I wouldn’t say I am terrified of clowns but there is something a bit creepy about them right?!

If I’m honest, I had my eyes shut for most of this one. It was just Hubby and I inside which added to the scare factor. I held on tight to his hand and attempts to film the best I could. I think the flashing strobe lights were amazing, literally in the flash of the light things appaear and disappear. It’s absolutely mind blowing. The next stop was SAW Alive. I’ve watched those movies, had nightmares about those movies and therefore felt anxious about the scare maze. The actors are all amazing, they are actually allowed to touch you but you cannot touch them. SAW Alive takes you through some of the weird scenes from the movie, I didn’t feel as scared in this maze but it still did give me the jumps in places. Platform No15 was a little bit slow in places and could have done with a few more actors jumping out but it had such a spooky atmosphere. The pitch black tunnel which seemed to go on forever was amazing. I could not see Hubby who was literally an arms length in front of me. Hubby and I was really looking forward to the Walking Dead mazes. There’s two at Thorpe Park for the Fright Nights this year. An outdoor based one and an indoor one. I anticipated them to be terrifying as that show still gives me nightmares. The actors were brilliant and they really made you feel like part of the action. It wasn’t exactly terrifying but it definitely put me on edge being that close to “walkers” or zombies for those who have never watched TWD! We took a quick break for some snacks. I adore these crisscut chips and was so glad to see them on the menu. I also treated myself to a Smirnoff Ice, my absolute favourite alcoholic drink and I haven’t had one for about six years. We then decided to wander around to our last Horror maze, the Containment. This was the horror maze I was most petrified about. It is a problem solving maze, you are locked into different rooms which are based on your biggest fears and you have a set amount of time to solve the puzzle/riddle and gain the code for to escape to the next room. You have to buy a time slot for this maze so make sure to book for this one. There’s only 10 people allowed in the containment maze at one time.

It was really tricky. The actors in each room were so good. Although most of the biggest fears were not actually fears of my own, I still felt completely anxious and panicky about getting out of each room. I even managed to solve one of the puzzles which made me feel very proud of myself. I felt this huge relief as we escaped the very last room. With Halloween just around the corner, a trip to the Fright Nights at Thorpe Park is definitely a great way to get you in the mood. I left Thorpe Park with less of a voice than I started with after all of the screaming I did. Hubby and I had a really lovely evening together celebrating our wedding anniversary and my birthday.