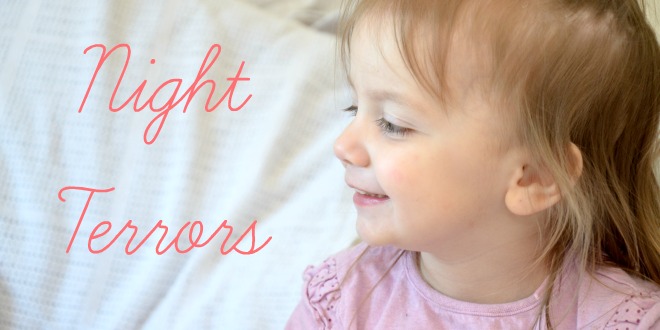 If you are a regular reader you’ll know that P2 has never been very good with sleep. Right from the very beginning up until recently she has woke on average 3 times a night but since turning two things certainly looked on the up. She had been sleeping through more often than not, if she did wake it would be before I went to bed so technically she wasn’t waking in the night. This week has been awful but not due to waking up. In fact she’s been sleeping brilliantly in her own special bed now. What’s been awful is that we have been experiencing what Mr Google says as being night terrors. This happy little madam is having a terrible time roughly half hour to an hour after going to sleep. She wakes crying, not screaming like she’s in pain, just crying. It’s not a cry that would make me rush to see her as I do quite like to leave her a little bit in case she can resettle herself, which she often does. This cry is different. She continues and I will go up to see her.

Her whole body is sweaty. Her hair stuck to her face. I will ask her what’s wrong and that’s when I truly know this is a different situation that I’m dealing with. She doesn’t answer, just cries loudly. Her eyes are half open but she’s not looking. I try to stroke her hair to calm her and figure out what she needs, maybe milk or a cuddle.

I’ll sit her up, it’s now been well over 5 minutes and she’s still crying without saying a word. She sits there. I hold her close. Stroking her hair and softly talking to her. She still hasn’t said anything and she is still crying. Then the cries change, P2 begins to thrash her body slightly, sort of like a shake but slowly. I can best describe it as when you have been crying for a while and you’re trying to calm down, the gasps and moving up and down.

Sill she’s crying. She’s hot and has not muttered a single word. I’ll turn the light on as a bid to snap her out of the situation. It helps a little. I’ll cradle her in my arms as I walk up and down the hallway. I get her to sit on the toilet and change the nappy she wears at night. I ask her to look at mummy but she doesn’t. Like she’s scared. My heart was hurting. She just would not look at my face, into my eyes. It was like I was invisible.

After 10 minutes or so, she’ll suddenly snap out of it. She’ll look at me. She says “bed” because she wants to go back to sleep as that’s where she remembers being last. She says “love you” to Hubby, to P1 who has been woken from the trauma and to me. She lays back down and drinks her milk, instantly falling asleep. Peaceful and calm. This has happened three nights now. Not consecutive, but over the past week. We have experienced episodes like this before she turned two which would only happen if she was to be woken from a nap in the car to be brought inside but they just looked more like a tantrum over this. This night terror thing is terrifyingly heart breaking. I am unable to comfort her, unable to make eye contact with her and feel completely useless.

Have you experienced a night terror with your little ones? I’d love to know how you manage them and what you’ve found to cause them/prevent them? Leave a comment below so we can try to help others cope with this too.