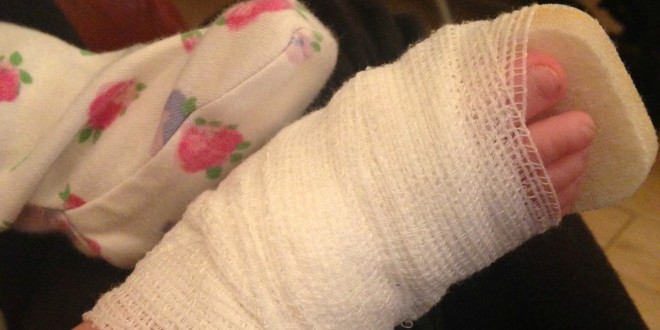 “It took six attempts to get the cannula into a vein”

Our stay in hospital was cut short thank goodness, although our visits are not over. p3 needs antibiotics intravenously, hence the cannula, for a minimum of five days whilst they await her urine results. Potentially she may not even have an infection but due to the high temperature she had and her age they give it as a precaution. Yesterday, the consultants decided that because she was feeding, going to the toilet and no longer had a temperature, that she’d be ok to go home.

We have to return once a day for her antibiotics until Monday where they’ll be able to see if her wee has grown any bugs and then decide the next plan of action. We’ve been warned that she would need an ultrasound to check her kidneys and potentially further tests. The fact that P3 seems much better and happier in herself since starting the antibiotics is worrying, it’s good that she’s getting better, but I’m concerned about the harm it might have caused and just how long she could have had it.

Anyway, we arrived up the hospital at 1:40pm for her scheduled 2pm appointment. We were seen at 2:15. She’d been awake all morning and had only just dropped off to sleep. The nurse couldn’t get the cannula to flush and made the decision to get a doctor to change it and give her a new one. At 3pm we were seen by the doctor, who also failed to flush and so began the process of changing P3s cannula.

We thought it was going to be a simple process but it wasn’t. It took two senior doctors, two hands and two feet, with six attempts to get the cannula into a vein that would work and flush. It’s now in her right foot. I’m used to things like this normally, with P1, but this was just awful. I absolutely hated seeing her scream whilst I held her head and body still, the nurses held her legs still and the doctor holding the hand/foot that was having the needle inserted. It sounded and looked like torture. By the end of the hour it took, her eyes were bright red and she was utterly exhausted. Her poor little hands are now bruised but the positive of it being in her foot means I can now dress and undress her with ease. P3 is now getting plenty of cuddles. I just hope this doesn’t happen again tomorrow when we return for her next dose.