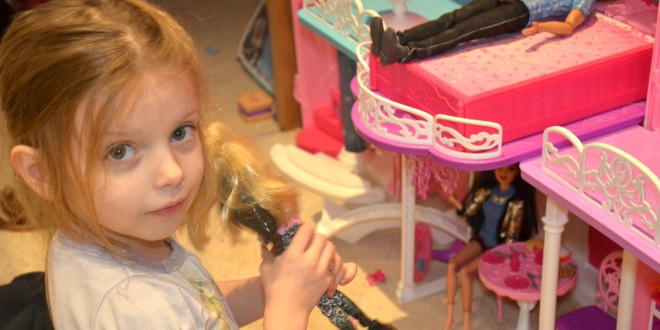 We were invited to join the Toys R Us team of Official Toyologists and the girls were given the task of testing out the Barbie Malibu House. It arrived whilst P1 was at school and the box was absolutely huge! P2 was really excited when we opened the box and was grabbing bits here and there. It wasn’t the easiest of toys we’ve ever built. The house was very fiddly in places, especially the stickers but once built it was so sturdy and nothing like I’d imagined. I expected the really cheap wobbly plastic that most toys of this type are made from.

The house has six rooms and comes with so many accessories to liven up the imagination for children. The detail is spectacular for a children’s toy, I was very impressed. The staircase is fully functional to take the doll up the stairs. I should probably say that the dolls do not come included with the Barbie Malibu House. The Barbie Malibu House even has a little smartphone holder which helps to enhance the play. However, I did find when using this feature the girls just sat and watched the phone rather than play so we don’t tend to use this feature very often now.

P1 was so excited to see the Barbie House, we didn’t tell her and waited for her to find it in our hallway upstairs and at first she didn’t see it which is shocking considering the size of it! She immediately got all of her Barbie’s out, which is quite a growing collection, and began to play. I showed her how to work the staircase and then P2 joined her. P2 wasn’t interested when we first completed putting the house up but as soon as she had P1 to show her the ropes she was really into it. The house is plenty big enough for them both to play comfortably alongside each other. As I’ve mentioned a lot, the Barbie Malibu House is quite large, it does however fold up so that it can take up less space. In all honesty I actually think the house takes up more space when folded over being out straight. The Barbie Malibu House costs £69.99 which I think is a little expensive for a toy but the quality and fun provided certainly reflects the price.

An excellent house for Barbie's. Providing hours of fun and imagination for children from the age of 3 onwards. Great quality.