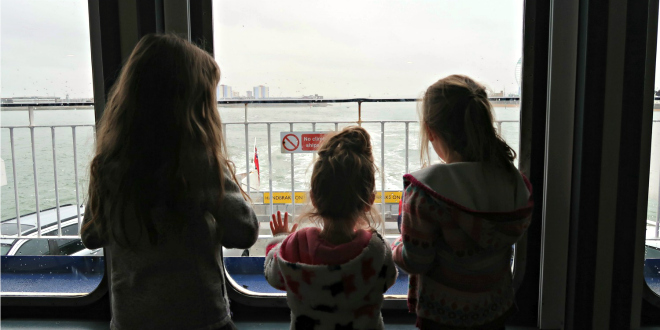 Travelling To The Isle Of Wight With Kids – IOW 2018 Day

I fell in love with the Isle Of Wight three years ago now. It’s literally the best UK destination for families with children. It has the perfect mixture of feeling like another country with all the home comforts. If you’ve been, you’ll know what I’m talking about and this is even more evident during summer months.

I have eight blog posts coming up from our most recent trip to the Isle of Wight. We decided to head over there during the Easter break, the girls had been asking to go back and it felt silly to wait. It was the first time out of summer months though so that was a little nerve destroying for me as I packed. It would seem that everyone and there neighbours were travelling on holiday on Good Friday. Obviously. Usually we’d travel super early but we’d picked to travel around lunchtime so that the kids could nap if they wanted to. They didn’t, our 1.5 hour journey to the ferry ended up being 3 hours due to an accident and generally busier roads. Thankfully said little girls were occupied by their DVD screens in the back.

I am known for always being early or at least on time. Honestly watching the minutes tick by as we were stuck in traffic was awful for me. I felt so stressed and anxious. Our ferry time went by, then the next ferry time was creeping upon us quickly too. Thankfully, we arrived and literally drove straight on the next ferry. The people at Wightlink are so accommodating and friendly. We were all desperate for the loo so that was definitely our first port of call. You have to leave your car on the ferry and climbing what feels like millions of steps to the seating areas. I was quite relieved to see we were on the ferry that has a little play area for the kids.

The play area allowed the girls to stretch their legs, we grabbed a snack from our car too. The journey takes about 45 minutes but it feels like by the time you’ve gone to the toilet, eaten a quick snack that you are being told to return to your vehicle. P2 was very pleased to be able to stroke four dogs on our little ferry trip. We were booked to stay in a holiday park called The Orchards Holiday Park. It was a caravan and camping park. From the Ferry terminal in Ryde it took us 25 minutes to get too. The girls were all pretty hungry, rather bored and needing more entertainment than the tv screens in the car. We were booked in to stay in The Russett caravan. It’s a static caravan with one double room and two twin rooms, six people. We’d never stayed in a caravan as a family before and I did honestly feel a little nervous that we’d all be on top of each other a little bit. But it was lovely and actually felt quite roomy.

I love to unpack when we go on holiday. Hubby thinks I’m mad but in my mind I want to know where everything is rather than living out of a suitcase. Especially with children in tow. So that’s what I got cracking on whilst Hubby cooked dinner and the girls got acquainted with their new rooms. With The Orchards Holiday Park being a self catering holiday, I’d packed a few frozen items, some fridge essentials and a lot of cupboard stuff. We’d actually done our shopping the day before our holiday rather than once we’d arrived like last year’s trip. After tucking in to a family sized cottage pie and munching lots of buttered bread, the girls started a little craft project. Easter themed of course. Their Auntie from Canada had gifted them these colour your own Easter eggs. They were the perfect activity for a rainy, caravan holiday evening.

They then hid the eggs for mummy and daddy to find. We were laughing so much that evening. I felt close to them and there’s something magical about the start of a holiday. Running away from reality. We snuggled up with a bedtime story in the lounge as I felt a little claustrophobic in their twin rooms. Despite having paper thin walls, the girls fell asleep really quickly. It gave Hubby and I a chance to veg in front of the sofa and attempt to watch some YouTube on the Wi-fi. You can watch our travel day below, there’s a whole playlist for my Isle Of Wight holiday videos and I’d love it if you could pop over and take a watch.