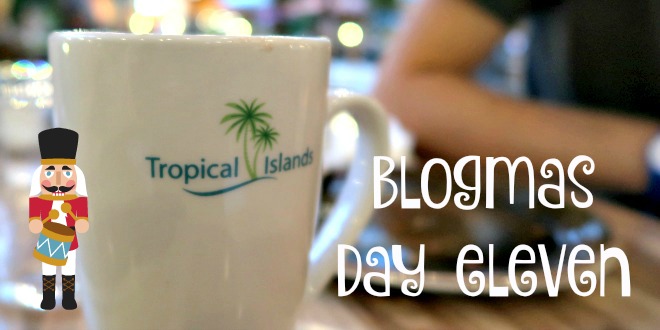 This is our second of three blog posts covering our little mini honeymoon to Tropical Islands Resortin Germany. The first blog post can be found here.

We woke up on our first morning feeling super refreshed. We’d gone to bed at 7pm the night before after a pretty hectic day of travelling and swimming. We wanted to get our breakfast done earlier rather than later in case the restaurant was really busy. I also needed to sort out my phone and this felt like the best time to lock it up in a secure charging station before breakfast. Tropical Islands was so quiet in the morning compared to what it is like during the day time. The sun hadn’t quite risen so the dome was dimly lit. We took a wander around the Boulevard which was shut at that time of the morning, it felt like being in a tropical country. The temperature was hot and everything looks so authentic. Breakfast is served in the Sawadee restaurant. It’s buffet style and was included in our room stay. There is a decent selection of foods, from fruit bowls, cooked breakfasts and continental. Oh and let’s not forget the delicious mini doughnut balls! Drinks are also included which was really handy. Hubby and I made sure we ate as much as we physically could so that we wouldn’t be hungry until much later as we were eating quite early. Whilst Tropical Islands was quiet, I wanted to get some photos of the kids zones and the pools without feeling awkward. Above is the Tropino Club area that I talked about in my previous blog post. I felt this horrible guilty feeling as we explored this area, wishing we’d brought the kids along with us. They would have adored it. This is the Lagoon area. It has warm water, whirlpools, water slides and a stunning waterfall that hides a little grotto. There’s also a sandy beach area and deck chairs. There are very cute looking rooms to stay in that overlook this pool which would be great for kids and really make you feel like you’re staying at a resort in a warm country. The Tropical Sea area is absolutely huge. The clear panels in the dome wall allow you to also get a tan (when it’s not winter season obviously) and is great for laying back on the deck chairs and relaxing. There’s a great bar here too and a splash area perfect for the youngest of travellers. We used this pool in the evening when it was basically empty and the lights were all switched on making it really glow. After spending many hours riding the rapids, relaxing in the pools and honestly having such a lovely time together, we decided to get showered and head into Berlin city centre to have a look around. It felt silly not to explore seeing as we were so close to Berlin. We decided to go to the Mall of Berlin. Honestly that place is ginormous. It took us about an hour to figure out where to find a cash machine so we could draw out some money to use the toilet.

Hubby really wanted to visit the Memorial to the Murdered Jews of Europe. It was actually just across the road from the mall. I didn’t know too much about this memorial. We queued for quite a while in the rain and then entered the underground information centre. It was honestly eye opening. I tend to prefer museums with more things to see and do, and this was very much reading boards of information. I felt my arms shiver and hairs stand on end reading some of the pieces taken from diary posts. We returned back to Tropical Islands back to the dry and warmth just in time for some dinner. We toyed with the idea of trying out some other restaurant options, but we had been so impressed the night before so returned to the Sawadee Asian Buffet. You get a really good amount of food for your money and that’s what Hubby is all about! After our dinner Hubby and I went back to the room to chill out and change into our swimming costumes. We had been really looking forward to experiencing night time at Tropical Islands. We headed out to the rapids before they shut (they have shorter opening times during the winter season). The water on the rapids in the Amazonia area was really cold and the freezing air probably didn’t help. It was so much fun though and very thrilling in parts that were much darker.

Hubby and I then decided to brave the Sauna & Spa area. It was required that you use the sauna and spa area naked. Something completely out of our comfort zone but something we agree we would try just once. It was terrifying but once we’d got inside the steam room and settled, it was absolutely fine. My skin felt so much better the day after too!

It’s much quieter in the evening time and the indoor pools are generally open until midnight. Hubby and I had such a good time and by about 10pm we was absolutely knackered and headed back to the room. It felt so magical and exactly like we’d stepped into a whole new world full of new experiences. I have one more blog post due very soon so keep an eye out for that!

Disclosure: This is a collaborative post.
Share
Previous #BLOGMAS Day 10 – Why Should My Age Matter?
Next #BLOGMAS Day 12 – Adopting Through The RSPCA