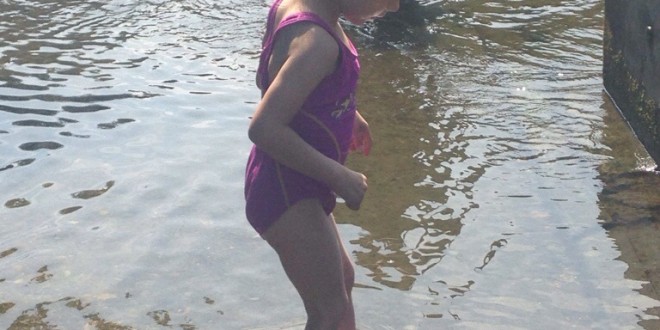 Today we ventured into the big wide world for the first time this holiday. It was hubby’s idea so as you can guess it didn’t cost very much just the petrol getting there. Hubby found a little place when he was out getting new wheels for his car. He described it as a “water bit that the kids can splash in” so I wasn’t entirely sure what to expect when we set off this morning. The girls wearing swimming costumes and snacks packed.

We drove through some lovely villages, the really old fashioned ones you see on postcards and within about 10minutes we arrived. It was a water ford. The bridge allowed restricted vehicles over the top and the lane going into the water was for the larger trucks and lorries. There was a man made river with small waterfalls trailing down under the bridge. When we arrived there were about four other families with children holding fishing nets and paddling through the water in their swimming costumes.

The weather was a little chilly to begin with. P1 seemed very excited but as soon as she got into the water, fear ran through her. She started screaming and causing such a fuss. P2 absolutely loved it! We didn’t push her to join in, she sat on our picnic towel watching until she found the courage to join us. The water was actually surprisingly clean and lined with pebbles which were quite painful on the feet so the girls both worn their sandals. We were there for about three hours and we all had a great time just wading through the water. The weather certainly warmed up so it was a great contrast of hot on our backs and cold feet. It’s certainly a place we’ll visit again and maybe have some lunch in the local pub who’s toilets I’ve already sneakily used for my pregnancy bladder. By the time we left there was barely an inch of grass free from families.

We had a lovely late time as a family doing something that cost less than a bag of chips. What’s better is we’ve found a new spot to visit on warmer days! Share
Previous When should I potty train my child?
Next I’m A Fisher-Price Mum!