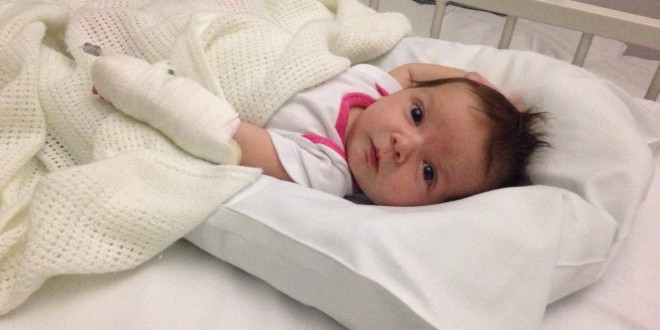 “we have to stay in hospital for the next 48hours”

Up until the evening, yesterday had been a good day! We’d all gone on the school run and then hubby, P2, P3 and I headed to Bluewater shopping to have a look around. We ended up spending money on the Disney Store and in Superdry. P1 was at her after school club until 6pm and then P1 & P2 went to bed smoothly (more on that topic soon on another post). Then P3 began restless, screaming and inconsolable yet again. We’d had a few days of her being a normal newborn and something just hit me that this wasn’t right. Hubby took P3s temperature just so we could rule out everything and that’s when things were confirmed – 38.5c. Hubby agreed that she needed to be seen and so at 9pm I phoned NHS direct (111). They told us to expect the usual call back between 1-2hours.

It took just a few minutes from hanging up to receiving our Out Of Hours appointment for 9:45. MiL came round for the other two and we went for the appointment. The Doctor was thorough; checking temperature, her throat, her pulse. She could see some white dots on her tonsils and so spoke to the hospital paediatrician who advised with the temperature we should take her straight there. We were seen within a few minutes at the hospital and they explained that with her being so young and having a fever that they’d give her antibiotics for 48hrs. Then they tested her urine which confirmed it is in fact a Urinary Tract Infection.

It’s made me feel very guilty. I feel like all her crying could have been caused by an infection the whole time. But I have to remember that we did take her to the doctors where we were told she was fine and just a “baby that cries a lot” so with that in mind we had no real reason to worry.

She’s been given antibiotics and we have to stay in hospital for the next 48hours. P3 is certainly proving to be very dramatic and a whole new experience for us.