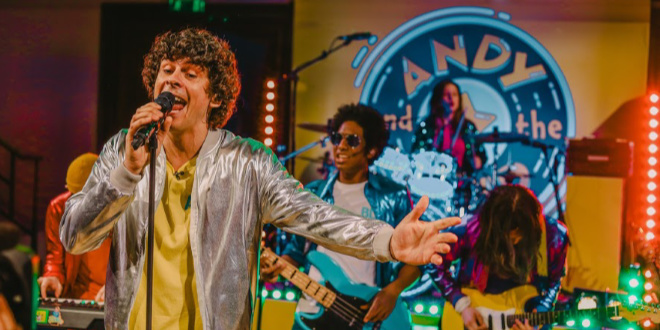 At the weekend we headed into London to be part of something exciting. It was the launch party of Andy and the Odd Socks brand new TV show, Andy and the Band, and we had the pleasure of being in the audience.

We arrived early as always to find a spread of pastries, juice and hot drinks awaiting us. It was a nice chance to warm up and dry off from a pretty wet walk from the train station, ahead of the show starting.

I wasn’t sure what to expect but it was a lovely intimate gathering of many faces I knew from the blogging world and the bands family and friends. What I didn’t realise is that they were going to be filming live on the CBeebies during the performances.

It was an incredible experience to watch Andy and the Odd Socks perform for us. They were all genuinely lovely people. The live show went smoothly for them and I feel very blessed to have been a part of it.

My daughters were bopping away at the music. It made me reconsider the choice we made to not watch live TV (we currently only have Netflix and Amazon Prime). I miss Andy and Elsa recognised him from the dinosaur programme.

The band performed a few songs from their new album Who’s in the Odd Socks? This is out to buy on the 3rd of April. The songs were so catchy, I can’t pick which one I loved best: Save The Animals or I’m An Artist. After watching the band play, we were treated to two of the brand new episodes of Andy and the Band. Eva and Elsa were captivated, Hubby and I were even in laughter from them. It’s such an easy watch.

I also loved that the band didn’t just disappear after performing, they came and sat with their families in the audience. It was very special.

On our way out, we all formed a queue to meet the band and get some photos. Who wouldn’t love those friendly faces?

As if our day wasn’t already fantastic, they had organised Krispy Kreme doughnuts for everyone on the way out! What a treat!

We then braved the weather, which was much brighter at this point, and took a lovely walk through London back to the train station. As much as I get very anxious about being in London, walking through it makes you appreciate the architecture and the bustle.

You can catch the new TV show, Andy and the Band, over on the iPlayer or of course on the telly right now. Don’t forget to order yourself a copy of the new album too!

I filmed our morning in London which I hope you’ll enjoy watching and being a part of too.

Disclosure: AD gifted trip – We had been invited to attend the launch party, however, all opinions are of my own.
Share
Previous Siblings 2020 – February
Next Potato Characters For World Book Day 2020