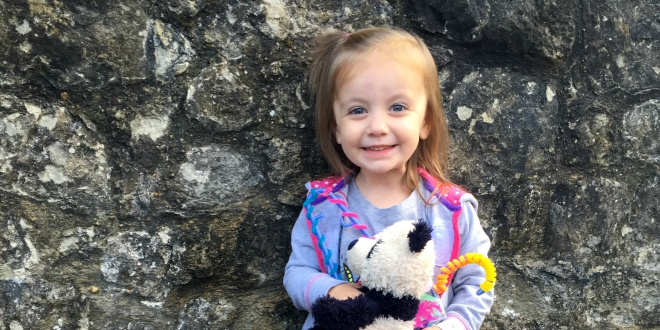 “We took an obligatory first day at nursery photo”

P2 has been ready for nursery for a while and it feels like such a long time since we joined various waiting lists. I needed to give her more than I could offer. For her to build friendships and grow her independence and confidence.  To follow some structure as she learns more and more about the world she lives in.
That day, the first day at nursery, the one we’ve been dreading happened yesterday. It’s an extremely strange feeling when something you know is the best for your child actually makes you feel completely sick with worry. I’d been calm and excited about until yesterday morning. I woke feeling completely unprepared for the journey my middle daughter was about to face. Of course I didn’t let her see my worry, I excitedly spoke about the day ahead and we headed off on the school run.

We stayed in the car whilst hubby took P1 to school. P2 showed some signs of being worried, saying “I’m not going yet” and demanding milk which is her comfort thing. I distracted her with some Peppa Pig on my phone and when we arrived at the nursery I began to feel even more nervous about how P2 was going to react.

She jumped out the car with enthusiasm, pulling Panda along with her and clutching her decorated hanger. Her face suddenly seemed older. We took an obligatory first day at nursery photo by the wall and headed in to the waiting area bit before the doors opened. The nursery is set in a church hall, it’s huge and has been there for longer than I’ve been alive! It’s one of the best nursery in the area which is one of the reasons we feel so lucky to have secured a space there after such a long wait. P2 pulled us along with excitement and was smiling the entire time we waited. But as soon as the door opened and she watched children go in and parents go out she began to cry. Not a screaming the place down cry but more a sob. A cry that really hit my heart like a tonne of bricks. She suddenly seemed so little and not ready for this big journey.

We went in and followed the instructions we were given; mark her in with the teacher sitting at the door, find her name on her table, sit and do a puzzle. P2 was holding on tightly to hubby, her face tucked in his shoulder. I peeled her away and sat her on the table. She still had tears pouring down her face. We tried to distract with a puzzle and when she’d calmed down and completed it I told hubby to leave with P3. I figured that instead of having a huge meltdown that we could probably control it, and with P2s very strong attachment to her daddy I figured by him leaving first, rather than together, I could be there for her.

It really worked. She cried and told me to stay but we talked about the day ahead and her teacher said they weren’t going to be doing some painting. She perked up and as she was contentedly doing some more puzzles, I kissed her goodbye and walked out the door. Just before I exited I glanced back, expecting to see an emotional wreck, but instead there was my grown up daughter happily sitting, chatting to her teacher and fixing a teddy bear back together.

Both hubby and I had a few tears in the car on the way back. I was barely able to contain my tears in the nursery but as soon as hubby said he felt teary, mine just fell. It feels like I’ve rushed her childhood away by putting her in a nursery when there’s no real need to, I’m a stay at home mum purposely to be there to look after my daughters. Not shove them off somewhere else and put the care on a stranger.

P3 fell asleep on the way home and we got about an hour of peace and quiet to tidy up our overspilling outbuilding. Monday mornings will be my days to be at home, probably either organising the house and decluttering ready for Christmas or blogging. The time didn’t actually go as quick as I’d thought it would. It was nice, too quiet but nice. I was desperate to get that bundle of cheekiness back home though.

They had to call P2s name out several times as she didn’t realise it was home time until hubby popped his head round the corner. They send them out one by one rather than going in to collect. When she realised she came bounding over with a gigantic smile on her face. She then sang one of the songs they were singing just before home time the whole way home! I am so thrilled she had such a fantastic first day. We got her home and had lunch, scrambled egg on toast, and she ate the whole entire thing which is very unlike her lately. I’m really hoping that tomorrow when she goes for her second day she’ll remember the books, songs, games and learning she did yesterday and that the tears will not happen again.

I am so incredibly proud of her. I’m also incredibly emotional that now I only have one baby at home full time which means they’re all growing too quickly.