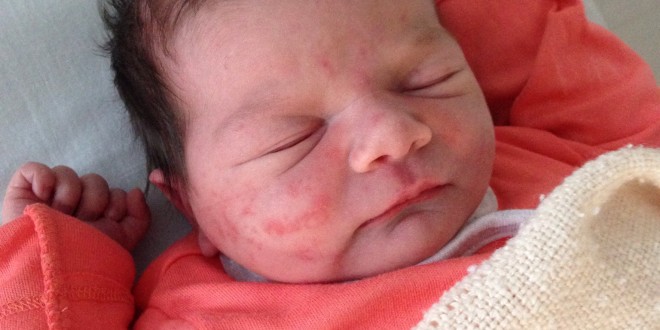 Welcome to the world Princess 3

I went to bed last night experiencing Braxton Hicks. I’d decided to sleep it off like I have done every evening for about a week now. The pains and tightenings were quite painful but nothing unbearable so I managed to sleep from 9:30pm to 2:45am.

I woke suddenly feeling a slight trickle and wetness. I ran for the loo as I didn’t want my waters to break in the bed. As I pulled down my knickers all I could see was red. It was terrifying. I shouted for hubby “I’m bleeding” where he came into the bathroom half asleep. When he saw what I’d seen he quickly phone for my MiL to come round for the girls so we could rush to hospital. She arrived within 5 minutes.

All that was going through my head was “I knew something would go wrong”. I’d said it all along. This pregnancy has been so smooth that something was going to go wrong and here it was… 10 days before my due date and I’m bleeding.

We arrived at the hospital at 3:30am. I did a urine sample, had my blood pressure taken and temperature. At this point I was having the same tightenings with period pains every 5-6minutes but still nothing unbearable, just uncomfortable. I was given an internal examination where the midwife announced that I was 6cm dilated, in labour and that the blood I had experienced was most like the waters from the back of the baby’s head as the rest of them were “bulging” in front of her head.

We stayed in antenatal assessment for about an hour before they transferred me over to the delivery suite. I’ve never seen anything so amazing. It was like a 5* hotel compared to the delivery rooms I had P1 & P2. There was a comfy memory foam type seat/sofa, a birthing ball, rocking chair, those pully things and the bed. Plus plenty of room to walk about. By this point and pretty much as I arrived into the delivery room my contractions had increased in strength but still only about 5 minutes apart. They quickly progressed and by 6pm ish I decided to accept some pain relief in the form of gas and air. It really helped although left me feeling drunk and spacey and very sick. I threw up twice between then and delivery. Part of my waters broke at about half 6/7 but the rest came as her head crown and she came sliding out at 7:47am.

I don’t have a good track record with feeling well after birth so had asked that she was wiped before handing to me which gave time for me to decide whether I could take her. This morning I just couldn’t so she was wiped, she cried and although looking quite grey/purple she was handed to hubby. From then it went quite rapidly wrong.

Hubby commented about he breathing and I think on the third time the midwife looked up and something changed in her face. The buzzer was pressed and our little girls just a minute or two old was rush to the side. Around 10 people entered the room. Hubby’s face went white as a sheet. We kept asking if she was ok and they all kept saying yes. The medical team were giving our baby heart massages. At this point a couple of midwives returned to me to help deliver my placenta which apparently was “just sitting there ready to come out”.

After what seemed like a lifetime, someone came over to explain the situation. P3s blood pressure kept dropping and her breathing wasn’t fantastic. Although she now seemed ok they wanted to take her to special care for monitoring. They brought her over and she didn’t look like the little grey baby anymore, she had colour and she looked normal. It gave me hope.

By about 8:20am hubby and I were left alone without our newborn baby girl and feeling extremely anxious about the next few hours. I took a turn for the worst. My vision started to go, like my migraines I get, and I just generally felt very unwell. They gave me an oxygen mask and some pain killers.

What they think is the cause is that my placenta came away (placenta abruption) at about 7:45, the midwife saw s clot come out just before her head, then a clot after. The umbilical cord was very stringy and pale. But thankfully she delivered swiftly after.

She stayed in special care until 4pm, although the whole time she wasn’t attached to any monitoring machines. She had her first feed at around 11am which went very smoothly. She then fed again at 1ish and was back up in my ensuite room by 4pm. She has to go back to special care twice a day, initially for 48hours, for antibiotics which are being given to her as a precaution to rule out infection.

There’s only one thing left to do now and that’s to announce the arrival of Princess 3. Born swiftly and dramatically after a 4hour labour on the 29th September 2014 at 7:47am, weighing just 6lbs 11oz!!!