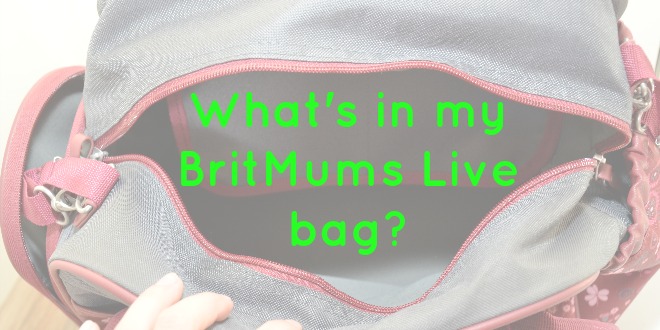 What’s In My BritMums Live Bag?

I really cannot believe that in under a week I’ll be heading to BritMums Live with P3 in tow and Hubby waiting at the hotel by himself (poor bloke). It feels like just yesterday that I secured my sponsor, Fisher-Price. Last year I was so incredibly nervous about the whole conference. I had no idea what to take, what to wear or what it would actually be like. This year I actually feel super calm. I can’t say I’ll be feeling that way as I approach the Brewery but for now, I am enjoying the peaceful approach and excitement.

As I have said, I am taking P3 along to BritMums Live this year and hoping that she takes it all in and helps me remember some bits… yeah right! But I will need to take a heck of a lot more than I had to last year when packing for two. I understand there’s plenty of babies attending this year. So for those travelling with babes in arms this year and for anyone else for that matter attending BritMums Live and of course the rest of you here’s what I’ll be packing for BritMums Live:

I will be taking my new Babymoov Style Changing Bag as it is literally huge! I didn’t realise just how big until I started using it daily. With all of my day-to-day bits inside there is still so much room so it will definitely be perfect for BritMums Live as I want to take my DSLR camera.

I’m planning to take the Doona so that it can be folded down somewhere nice and neatly. I’m still debating whether to baby wear or not, P3 doesn’t like to be in it for too long and being indoors I’m worried we’ll both overheat. I will also be taking the Doona carry bag for any freebies and P3s blanket. I will also put a few non-noisy toys in there too.

Last year, I was pregnant and so that may be the reason for the hunger I experienced, however this year I’m going prepared and taking some cereal bars for myself. They have plenty of cake and on the Saturday a lunch is served but I just felt so hungry inbetween. I’m also taking some mini rice cakes for P3 in her Babymoov Silicone Containers as the container folds down so when she’s finished it won’t take up much room. I’m still debating about the cheese puffs as orange food slways stains. I’ll be packing a bib or two and her squeeze food pouches.

I’ll be taking the usual baby items with me like nappies, wipes and milk. I have planned in my little head to take premised bottles to save the bulk of lots of bottles in my bag, and they can be thrown away after too, so I’ll have one bottle than I can rinse here and there. I’m also using a couple of babybowls from Babymoov to store powder to use overnight and as a backup. P3 hasn’t been drinking much milk with all this beautiful weather but you never know when you may be cut short. I’ll be taking a portable phone charger with me as last year my battery practically died by the end of Saturday and it drained so quickly I couldn’t sit and social media the trip as much as I wanted to. I have recently upgraded to the iPhone 6 Plus and so far so good. Although I want to take my DSLR I will probably end up not using it so may leave it with hubby in the hotel room. What do you think?! I just think I’ll have my hands full with baby to get my massive camera and flash out.

Last year there were notepads and pens on the table. Which was handy as that was something I didn’t take because I thought I’d write everything down in my notes on my phone, but it turned out I preferred putting pen to paper so this year I’ll be taking my notepad that I’ve started using for all blog stuff. I’m also taking a pen but will grab a Brewery one as a momento. I have also got a pack of business cards to take with me, I didn’t give many out last year but I was super nervous about everything so I’m prepared if I find my confidence.

I think that’s it. I’ve probably forgot something important so please shout at me if I have. I’ll obviously be taking clothes, shoes and toiletries to stay with hubby in the hotel. We’re staying at the Citadined Holborn-Covent Garden so also please let me know if anyone is staying there or nearby too!

(I am a Babymoov Ambassador and some of the products featured in this post were sent for review purposes. However, all opinions and photos remain my own)