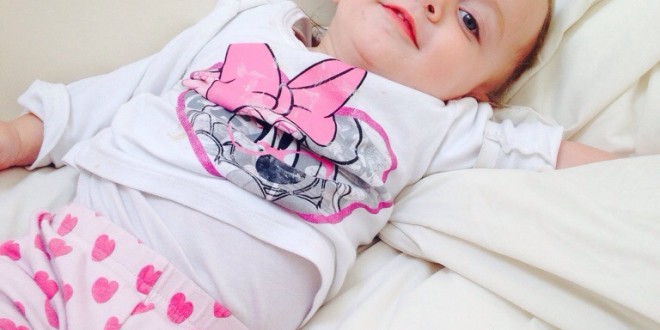 When should I potty train my child?

We were given a potty a while ago and since then it’s been mooching around our lounge in various places. I’m in no rush to potty train P2, it didn’t happen for P1 until she had just gone 3 so I’m not expecting miracles. Until this past week.

P2 has frequently pointed to her nappy when she needs it changing. She makes it quite obvious to everyone when she’s doing a wee or a poo. At the back of my mind these were all little signs of her being ready to take that leap of independence, but I’m most certainly not! However, with the weather warmer and pretty much unbearable I decided to allow her to be nappy free but only for a little while as she’s previously had a tendency to wee everywhere when naked. The first nappy-free time we had no accidents or potty uses. But on the third session, Friday 25th July, the shock was handed to us. She sat down on the potty and did her first ever wee!!! I nearly cried, with joy or upset I’m not sure but the whole thing was emotional. P2 was so proud of herself, pointing, clapping and smiling. But since then the weather has been cooler and we haven’t had any naked times.

Yesterday I took everything off P2 and allowed her to roam free again. It was quite chilly so I was concerned about her little lady bits. I remembered I’d recently sorted P1s old knickers and stored them ready for P2. We found them and put them on. P2 paraded around all proud and showing her sister. I frequently asked her if she needed a wee wee, where she’d respond by shaking her head and saying “no”. Then all of a sudden she rushed over to the potty moaning. I took her knickers down and placed her on the potty. To my surprise P2 did a rather big wee. Again, we all clapped and made a huge fuss over her. Unfortunately, she then had some juice and a little accident which we ignored but I decided to put her nappy back on. We’re in no rush. I tried to rush P1 at two and a half years old and it just went terribly wrong with more accidents than potty use.

I’m so proud of her though. That at not even 18 months old she’s done two wees on the potty without much promoting. I think maybe it’s time to start slowly potty training, I don’t want to confuse her but if she’s ready, then she’s ready and I can’t ignore that just because I want her to be my little baby for a tad bit longer. She’s developing into such an independent little person far too quickly.

Tips for potty training would be very much appreciated!?

Share
Previous When Should I Stop Being Naked Around My Child?
Next “We had a lovely time as a family doing something that cost less than a bag of chips”