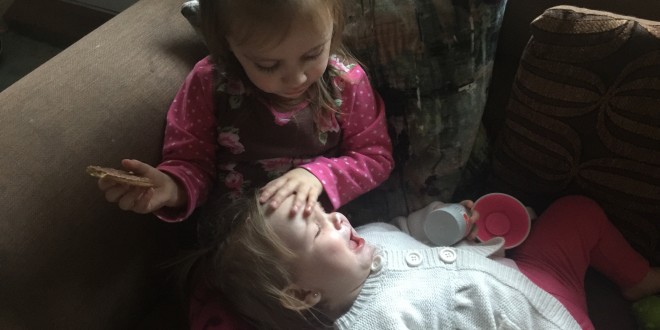 Why Do Babies Cry?

Babies: For newborns, crying is their main way of communicating.

Preschoolers and school-age children: Children tend to cry less as they get older. Once they can talk, it’s much easier for them to tell you why they’re upset and what they need.

Why do we cry? Well the most obvious answer is to communicate a feeling. I cried the other night. All because of our next door neighbour. We have rented our property for over two years now and we had lovely neighbours either side of us. They were kind, they chatted, they took parcels in if they needed to and we sent Christmas cards to each other. They both moved earlier this year and were replaced. One lady we rarely see, she’s younger like us, and the other is a middle aged woman with a dog. She’s attached to our terraced house.

Back in May, just after she’d moved in she complained to us about the noise our stairgates made which was frustrating of course. Tuesday evening, this Tuesday, we received a call from our landlord to advise that our neighbour had made another complaint about the stairgates. That was when I cried. I felt so angry and hurt that she didn’t feel she could approach us with her concerns. I wrote a letter to her. It wasn’t a rude letter despite my inner head wanting to put down a whole story of anger. It was polite. I reminded her that her dog barks but we have never complained about that because we know dogs make noises just like kids do.

This wasn’t the full story though. It seems. Wednesday evening at bedtime, she knocked on our back door. I won’t go into full details but it wasn’t just the stairgates she had a problem with. It was that our children cry and it is disturbing her peace (her words not mine) and that it was effecting her sleep. She told me that she works in the medical profession and that people’s lives depended on her. I looked at her blankly and asked her what she actually expected me to do because children do cry and they’ve been crying a lot more recently as they’ve been ill.

This clearly hit a nerve with her and insults raged. She was stood at my back door insulting my parenting. Saying I needed to take them out for fresh air as if they were her dog. She asked me if I wanted a war between her dog and my children. Then pushed me. Hubby stepped in at this point where she continued to throw insults saying we needed to learn some respect.

The problem is, still after a whole day has passed I can’t understand what she actually wants me to do. Children cry to portray their emotions, especially P3, and I can’t just gag them or separate them forever. They argue and one always loses. Or they trip and hurt themselves. I feel so guilty that my girls are not only disrupting my sleep but our neighbour too, yet so angry that she can’t be understanding about it.

Yesterday, I spent the entire day following the girls around and trying to prevent every little cry or loud noise. I feel like it’s consuming me. I hate confrontation and I hate the thought that we have an enemy, who happens to live the other side of our wall! I’m treading on egg shells and I know that I shouldn’t be. We have done our research about noise pollution and thankfully children crying/shouting/laughing are not classed as that but it’s still so worrying that someone has the potential to turn your life upside down. From the things she said, she clearly thinks we are neglecting them.

P3 isn’t 100% at the moment. She’s got eczema and we re dealing with this for the first time. Last night from when she went to bed at 8pm she cried every half hour until 1am where I decided to come downstairs, not because I was worried about disturbing hubby or the other two. I spent the entire night downstairs sat upright on our armchair with P3 asleep in my arms because I was scared to disturb our neighbour. This is such a rant post which I don’t normally do, but I needed to vent somewhere. I’ll probably cry, my kids will probably cry and I just hope she can find it in her to understand. I know I shouldn’t be feeling the way I am because her complaints are uncalled for. I just feel so incredibly hurt.