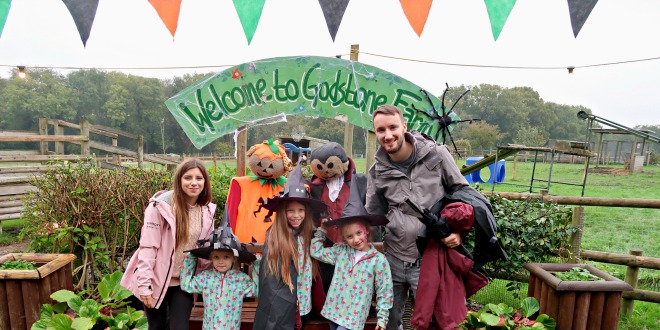 Last week we had the pleasure of attending the preview of Godstone Farm’s Wiglet’s Great Spook-er-ree. This is an event running from 26th October until 3rd November. It was a special blogger event hosted in the morning and I was super excited.

We arrived early, despite getting stuck in some typical M25 traffic. Instantly we could see the start of the extensive Halloween decorating that had been done at Godstone Farm. It was incredible the attention to detail and it really set the atmosphere for a spooky visit. We took a wander down to the Tea Room which had been given its own makeover and is now called the Haunted Tea Room. This is where we could wait for the rest of the bloggers to arrive and get our own little makeovers.

The team at Godstone Farm also put on a delicious breakfast spread with bacon and sausage rolls, pastries and even doughnuts! We all got tucked in whilst the girls took it in turns to have their face paint done. On a normal Wiglet’s Great Spook-er-ree day, the face painting is done elsewhere and there is a charge for it. Our day was structured as part of the preview, usually the attractions are all open to explore as you wish. Our first to explore was the Light Illusion Tunnel. Witchy Poo (aka Camilla) our guide for the morning gave us all special glasses. I’ve seen these in shops during Christmas time, they make the fairy lights turn into little shapes. My video below shows you what I mean so do head down there to watch.

I don’t want to ruin the fun too much, but the Light Illusion Tunnel has some fun Halloween scenes and ultraviolet lights with bright paintings. It’s all very child friendly which is important for a family attraction. Elsa, who is usually quite nervous, absolutely loved going through the tunnel. We then went back down to feed some of the pigs. Freya loves pigs so this was really exciting for her. Patricia the pig was very cheeky and attempted to climb over the fence. The children loved that!

Everywhere you look at Godstone Farm, it is decorated for Halloween. Signs have been switched for spooky ones and there’s lots of opportunities for photos all around the farm. Witchy Poo then took us all to do some Spooky Crafts. She showed us how to make cute Spider Headwear. It was a really simple, mess free craft that everybody got involved in. Hubby took charge of the stapler and they created three smashing spiders which ended up being placed over the top of their witch hats. A rather cute look if you ask me.

My favourite part of any farm is the opportunity to touch the animals. I’m my mothers child (she used to be a veterinary nurse if you didn’t know). Godstone Farm have a special Animal Handling Barn where you can get up close with the animals and even hold them under supervision.

Our little group gathered into the side room for a private handling experience. The animals on offer were not really of the fluffy type you’d expect. Instead they definitely had a Halloween theme – Salt the rat came for a stroke, Draco the Bearded Dragon and Cheryl the tarantula. There was also a scorpion too.

Witchy Poo then hurried us into the main barn after hearing some commotion from a goat. It turned out that one of the goats was actually giving birth. This was the most incredible experience to witness and something we may never get to see again. I did feel weird filming the poor Mummy goat, but wanted to document it for our memories.

It was very hard to tear the girls away from watching the little kid and its Mummy in the first few moments of its life. But we had some Pumpkin picking to take part in! The Pumpkin Carving area is another activity that you will have to pay for and isn’t part of the entrance price sadly. For us the carving wasn’t open, but we got the opportunity to race down the lanes with a wheelbarrow and pick a pumpkin to take home.

The Godstone Farm team then surprised us all with goodie bags, including the adults which very rarely happens. It was so exciting and look at little Elsa’s face below! The gift shop has some great Halloween gifts to buy so don’t miss a visit in there.

The pumpkin carving area was the end of our time in the preview event. We had the very best time exploring the Halloween offerings and we was all very impressed. I personally loved the attention to detail across the whole farm. You can see how our day panned out in the video below. Don’t worry, I have included a little warning for anyone who may not want to watch the baby goat come into this world.


After saying our goodbyes, we booked onto a tractor ride. It had started to rain at this point but that didn’t effect our last moments with Godstone Farm. We spent the last bit of time in the indoor playbarn before heading home, very soggy!

A family visit for us would cost just under £50! That’s such a good price and I’m even considering getting ourselves an annual membership to Godstone Farm as there’s so much to do here all year round and it’s less than half an hour away. All About Dogs Show & Mum’s First Birthday In Heaven

Learning To Read With The Bear Can Read

Out In The Wilderness From Tales By Mail

There are hundreds of different subscription boxes now on the market, anything from crafts and …