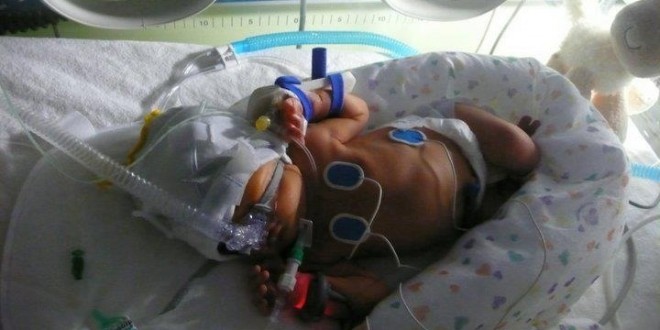 Being pregnant at the age of 15 I never imagined that anything would go wrong. Naive. Stupid. Young. I gave birth to P1 at the age of 16. That day was a terrifying day. I was now a teenage mum to a premature baby. P1 was born at 33+1 weeks pregnant. 7 weeks early.

P1 was born at 10:27am on Christmas Eve 2008, she weighed 4lbs 13oz which was actually a really good weight and gave us a little hope. P1 couldn’t breathe on her own and was rushed off within a few minutes of her birth.

I remember feeling scared, overwhelmed and completely unprepared. The hospital staff were pretty useless, they treated me like a child not a mother and wouldn’t tell me about P1s health unless my mum was present. It was frustrating and upsetting. I remember the first time I saw her; she was so little, peaceful and so beautiful. Then the second time I saw her she was wired up to machines and inside an incubator. I was allowed to touch her through the little holes but I was “told off” by the nurse as apparently I shouldn’t stroke her hand as it irritates babies. I was upset, furious and confused. I still didn’t know what was wrong with P1 and whether she’d be ok!

P1 survived the most crucial few days and gradually put on weight. I spent from 7am until 10pm each day at the hospital. I sat and watched her breathing, watched the nurse feed her through a tube every few hours slowly increasing the volume.

I was allowed to hold her for a maximum of 10minutes once a day and this was usually to try and breastfeed. Which was a struggle because P1 didn’t yet have the sucking motion she needed to establish a good latch. I expressed throughout the day and night for her, I had milk filling our fridge and freezer at home and my basket was full in the hospital fridge too.

Eventually, after 27 horrible and nerve racking days P1 was allowed to come home. I was terrified at this thought but excited. She was well now! Well enough to come home for the first time. Everything was now down to me, I didn’t have the medical support to rely on anymore.

The first few days went by like a blur. Sleepless nights, nappies and baby sick. Lots of sick! The health visitor was concerned as P1 started to lose quite a bit of weight due to her sickness. Literally all the milk she drank came straight back up. We were told to change her formula. But at 5 weeks old things were definitely not right. P1 was rushed in an ambulance from Southend Hospital, Essex to The Royal London Hospital in White Chapel, London at 9am Saturday 31st January 2009. They had diagnosed Pyloric Stenosis which is where the passageway from the stomach to small bowel is too narrow to allow anything to pass.

The London hospital was so much more welcoming than our hospital. They spoke to me like an adult and there wasn’t such strict rules about guests around the bed. They explained everything they did to P1; why they were taking her blood pressure, why she had a feed tube and what pyloric stenosis meant for her. She needed an operation!

The 1st February 2009 was the day P1 had her first operation. She was 5 weeks old and not even meant to be in the world yet. We went with the nurses to where P1 was going to be sedated. They explained that she may wiggle and cry in distress and I could feel my heart beating hard enough to escape from my chest. They put the gas mask over her face and I remember it as clear as if it were yesterday. P1 stared straight at me and slowly, peacefully fell asleep. She had no energy to fight it.

That day it snowed. In fact I think it was that week when England experienced their most snowfall for a very long time. This delayed the day I could bring her home. The operation was a success and as long as P1 could keep her feeds down for 24hours she was allowed home. She did! I was so proud and thankful.

My girl has been through such a lot already and she’s only 4years and nearly 11months old. She’s brave. Braver than me. She’s taught me to love and fight through everything. My little Py-Preemie baby! She still fights the side effects of being so premature in her every day life. She’s tiny and she has joint hypermobility. I’m so proud of her!