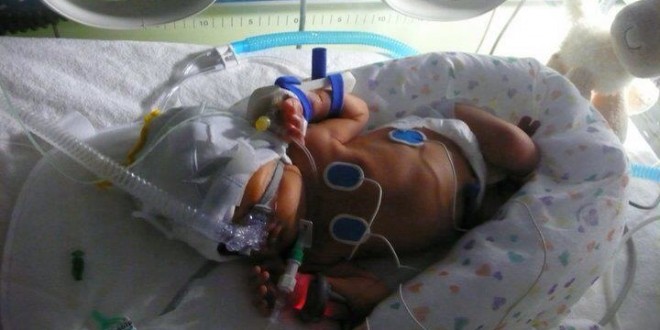 Today is World Prematurity Day. Around the world each year 15 million babies are born too soon. In 2008, I was part of that statistic when I welcomed P1 7 weeks early. In that same year the idea came to raise awareness of the serious issues that these babies and their families face and so World Prematurity Day was born.

My pregnancy had most likely been more stressful than others. I was 15 when I found out I was pregnant and 16 when P1 arrived. I was going into my last year of school so I had a lot of bullying, name calling and many overlooking eyes. I was referred to a consultant that specialised in mothers under the age of 25. I had lots of scans and many appointments, all of which I was told I was carrying a healthy, normal baby. I didn’t think anything could go wrong and was mentally unprepared for her arrival.

On the 23rd December 2008, at 3:30pm, I started to experience really bad period pains. I remember thinking nothing of it at first, until I realised they were actually coming and going at quite a regular pace. I’d phoned my mum who was just around the corner at work and explained what was happening. She said it wasn’t labour as I was still able to talk to her normally but I should ring the hospital for some advice. The hospital told me to come straight in so my mum arranged for my Grandad to pick her and me up.

When they arrived I was stuck to the toilet. I could not stop opening my bowels and wondered how I’d actually get to the hospital. My mum took one look at me and exclaimed “oh, you are in labour”. I was 33 weeks pregnant and I couldn’t and didn’t want to believe I was in labour. I was scared!

I arrived onto the antenatal ward and was asked to do a urine sample. We was there about 10 minutes before the nurse came in a confusion, she told me I needed to be in Central Delivery. Up until that point I was convinced they’d be able to stop my labour and I’d go home, but mentioning the word “delivery” clearly meant I would be going in there and not leaving until my daughter was born.

On delivery, I was given pethidine and a tablet that was meant to slow down the labour. They also gave me some medication (I can’t remember if it was an injection or oral) to strengthen the babies lungs. They hoped that by slowly the labour it would either stop or that it would give enough time for her lungs to strengthen. The midwife asked if I had any clothes for the baby and laughed when we showed her the newborn outfits. “They won’t fit”. What?? I remember thinking. The newborn outfits were tiny but my baby was going to be even smaller!!

I spent my labour drifting in and out of sleep between contractions. I was sick a few times which now I’ve realised probably wasn’t due to the pethidine as it happened with P2 and P3, so I’ll blame it on the gas and air! In the morning of Christmas Eve and after 19 hours of labour my beautiful and tiny 4lb 13oz daughter was born. She cried but kept stopping. The midwives and doctors that surrounded her explained that she “kept forgetting to breathe”. They let me have about 30 seconds of cuddles before whisking her away.

My mum ran me a bath and helped me to clean up. I then had a short nap and waited to be transferred to the postnatal ward or to see my baby. It was horrible being moved to a ward with five other new mums, they all had their bundles of screaming joy. I didn’t. I didn’t even know if she was alive at this point.

It seemed like a lifetime before I could see her. She was in Intensive Care where the room was darkened. The nurses wouldn’t speak to me until my Mum was present but they allowed me to touch her. I then got told off for stroking my own baby as apparently it irritates her! I felt very frustrated and upset. I just wanted to know she was going to be ok. I was discharged from hospital on Christmas Day, I went home for a bath and Christmas dinner then returned to the hospital to sit by my newborn. She was attached to breathing equipment and monitors, she had a feeding tube down her nose and I expressed milk for her. I spent every day up the hospital from about 7am until 10pm. On New Year’s Eve I watched 2009 arrive with P1 in my arms.

The weeks dragged on. I came home to an empty cot each night. The fear of leaving her was awful but they had no facilities for me to stay with her. P1 grew in strength and advanced through the different rooms in the Special Care Baby Unit and soon she was out of the incubator breathing by herself. We struggled to breastfeed but I continued to express for her. P1s weight had dropped to 4lbs 3oz so her stay in hospital was lengthened until she started gaining again.

Due to stress and lack of baby-contact to breast, my milk dried up by the time she was allowed home so I switched to formula whilst we were in the Homing In Room. (Which is the room where the hospital don’t monitor anymore and see how well things go before letting you go home). Whilst here, P1s weight dropped slightly and we had to spend an extra night as she adjusted to feeding from a bottle. On day 27 I was finally able to bring my baby home. I didn’t experience the newborn days, the sleepless nights and lazying on the sofa all day with her whilst I recovered. It was all very worrying and something no one could have prepared me for. One thing that will always stick with me is the lack of support from the SCBU staff, they did a wonderful job with P1, but were quite rude and judgemental towards me. I was constantly watched over when changing her nappy and they wouldn’t be honest with me about her health.

This is when I turned to Bliss after seeing a leaflet in the hospital visitors waiting room. It’s crazy the amount of support and information you can get from an online community. It’s a vital part of surviving those scary days of becoming a parent or family of a premature baby. I urge you to support Bliss in any way possible by donating today, on World Prematurity Day.

P1s prematurity was put down to me being too small to carry her to term, I’ve proved that this isn’t true, but her early arrival has come with many complications and heartache. She turns 6 years old this christmas and in that short amount of time she’s had an operation on her stomach, an MRI, many blood tests and hospital trips, physiotherapy and paediatric appointments. This girl has strength that inspires me. She fought right from the very first breath she took and stop fights today.