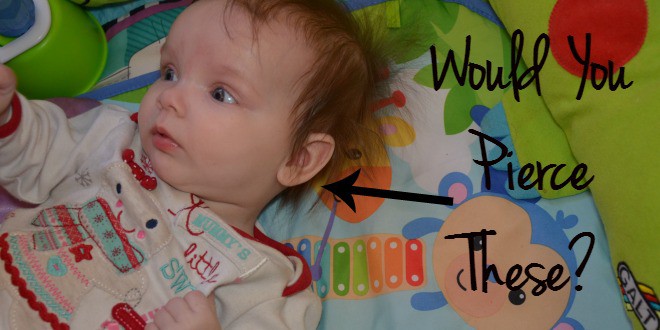 Would You Get Your Child’s Ears Pierced?

Earing piercing in children is certainly a contraversial topic. It’s been labelled as child abuse and parents that get their children’s ears pierced are very openly abused themselves with hurtful comments. I’m one of those parents.

I had P1s ears pierced at 6 months old, I wanted her to have the choice of whether she wanted to wear earrings as a grown up or not. Most importantly, I didn’t want her to remember having her ears pierced like I did. It was horrific! A family member didn’t agree and kept taking them out whenever she babysat P1 and therefore they closed up. When P2 arrived, we planned to get hers done at 6 months too, at which point P1 asked to have hers done at the same time. I agreed.

P2 cried no more than the neccesary jabs they have as a newborn, in fact she probably cried less. However, P1 screamed after the first was done and refused her second, just like I did and the whole reason I had it done for her as a baby. Somehow I managed to persuade her to have the other one done and she was really upset complaining they were painful for the rest of the day. Will we be getting P3s ears done? Most definitely. Does that make me a bad mum? I don’t think it does. As an adult, she can have the choice whether she wears them or not and like I said, as a baby the pain is forgotten within a few minutes.

Anyway, this post isn’t mainly about the reasons behind why I had my daughters ears pierced as babies. P2 has started to take hers out during the night. She had never touched or even noticed she had earrings up until we thought it would be a brilliant idea to get the girls new ones for Christmas.

Nearly every morning we find P2 with no earrings in or only one. Since Christmas we have lost around 4 pairs of earrings. Hubby has had to buy some cheaper ones from Claires so we have a back up. P2 tells me she won’t touch them, and doesn’t for the duration of the day but come bedtime it’s a whole different story!

P1 never ever touches or takes her earrings out. We are going to have to take P2s earrings out at night and put them back in when she wakes up.

I’m interested to hear your opinion on ear piercing for children?