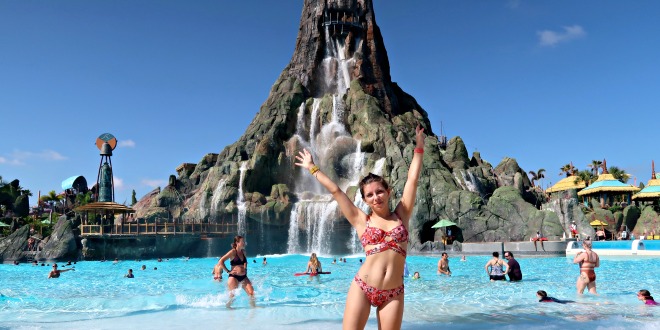 Volcano Bay Blew Us Away #7

I love it when we visit brand new places that we’ve never adventured to before. For us Universal’s new water park, Volcano Bay, was one of those places. It was being built back in 2016 when we visited before. We’d seen the tall construction of the volcano in the middle of a building site. It was hard to imagine it as a finished theme park.

We had been staying at Cabana Bay Beach Resort for two nights. The hotel is literally next door to Volcano Bay and has an exclusive hotel guests only entrance through the Lazy River Courtyard. As a hotel guest at Universal Orlando Resort, you are able to enter Volcano Bay at 8am, an hour earlier than non-hotel guests.

You have to go through security and have your bags checked just like all entrances of Universal parks. I love that because it makes you feel so safe knowing that everything is thoroughly checked. The entrance to Volcano Bay wasn’t as busy as we expected it to be. As part of your admission tickets, each guest is given a TapuTapu wristband as they enter the gates. This wristband allows guests to hold their spot in virtual lines for rides and activate several interactive locations inside Volcano Bay. You also tap them when you arrive at each ride.

The TapuTapu was quite big on Elsa’s wrist and she soon ditched hers and popped it in the bag. It didn’t matter too much as she didn’t do any of the rides that required it. Freya and Eva kept there’s on for the day as they enjoyed getting the fountains to spurt water at people.

Volcano Bay has lockers to hire. There are three different sizes available: mini, regular, and family ($8, $12 and $15 per day). We actually didn’t hire a locker when visiting as we decided to take very minimal items in a beach bag which we left on a chair by the Waturi Beach. We decided to set up camp by the Waturi Beacah and left my Mum with all three children so that Hubby and I could get some of the bigger rides and slides done. We spent about an hour exploring the different slides.

The Volcano itself has the more extreme rides I suppose, with the Ko’okiri Body Plunge (both of us were too scared for that one) and the Krakatau Aqua Coaster going through it. The Krakatau was absolutely awesome! It mixes rollercoaster with water slide and you sit in an inflatable canoe boat. As with all the slides, the heavier the load the faster you go.

Hubby and I then had a quick ride on the Maku and Puihi of Maku Puihi Round Raft Rides. The rides at Volcano Bay seemed to be in pairs with one being more intense than the other. It’s worth noting that they only open one side of the Volcano until it turns 9am. The queues started to pick up around this time as it was open to other guests. The girls had been busy making sandcastles with my Mum. Freya creating the Hogwarts castle and grounds in sand. The other two had been enjoying the wave pool and splashing around with my Mum. Volcano Bay offer float vests free of charge and they have a huge range of sizes available. We didn’t bring our own ones after experiencing the same at Aquatica, so we sized the girls up with the Volcano Bay options. They are lightweight and safety approved.

The first thing we did with the girls was the Lazy River, the Kopiko Wai Winding River. You have tubes to float on. There’s a lot of dripping water or sprays throughout the river which Eva wasn’t happy about. In fact she cried most of the way around as she has a little fear of water on her face. So we hopped out at the nearest exit/entrance and waited for the rest of them to finish.

We then took the girls to the Runamukka & Tot Tiki Reef Play area. This is for children under 48″ tall however adults are allowed to wander around with their child too. This area is a safe splash zone with child friendly slides, fountains and sprays to interactive with and generally lots of fun things to explore.

One thing to note about water parks in Orlando, is that the floor gets scorching hot. I would highly suggest purchasing some cheap flip flops or even special water shoes to wear. We had some experience from earlier in the week so made sure the girls were wearing their sandals. The sun is also so hot and I was very grateful for their amazing Frugi Swimsuits as they are UV protecting and covered up the majority of the girls bodies during water play. We had all began to get a little peckish for food so took a wander to find a nice place to eat. Elsa specifically is quite fussy so I needed to find something suitable for her too. Volcano Bay has lots of different places to eat including restaurants, fast food and small snack stalls.

We found The Feasting Frog which had a patio seating area and the stall itself was shaped like a tropical frog. Here you’ll find refreshing drinks and satisfying snacks like the Poke Poke Bowl, Tacos, or Plantain Chips & Guacamole (otherwise known as Nachos).

We ordered plain nachos with the cheese and dips separate. Perched on a barely shaded table and munched on our lunch. It was actually really nice although the melted cheese is very different to what you’d have in the UK. We all managed to eat enough to fill our tummies for the rest of the afternoon. There are actually lots of different shaded areas to sit at Volcano Bay. The park never felt too busy during our visit and there was always somewhere to rest.

I somehow managed to persuade my Mum to ride one of the slides with me which was great fun! It went super fast and we was both crying with laughter. We then headed back round to the children’s splash area as the girls really liked it there.

We had reservations for dinner that evening so we decided to make a move in the late afternoon to allow us time to spruce up. As we was staying in Cabana Bay, we didn’t bother changing our clothes before heading out of Volcano Bay. Elsa actually fell asleep in Hubby’s arms on the walk back to our room so we popped her in the bed. We all dolled ourselves up then woke Elsa up with some time to get her ready too then headed off to catch our water taxi. I’ve explained it before that we had been taking the water taxi from Sapphire Falls, a different hotel, as it was much more scenic than the bus shuttle offered at Cabana Bay. Sapphire Falls is just a short walk (over the road) from Cabana Bay. We had dinner reservations at the Toothsome Chocolate Emporium. During our first trip to Universal we had eaten here and adored it. Universal Orlando had kindly organised for us to eat there again this time. I couldn’t stop telling my Mum all about the gorgeous milkshakes they serve. It was busy at 6pm in the restaurant. We had been seated downstairs by an enthusiastic server. Everyone is just so kind in America, specifically in Universal. She seated us originally at a table in the middle but we asked to sit in the booths as it’s so much easier to keep the kids sitting in those.

I won’t lie about the fact that Eva was super grumpy and emotional. Picking out our foods from the menu was quite a stressful experience and we did have to raise our voices to Eva. Eventually she calmed down and we ordered our food. There’s so many delicious options on the menu for both adults and children. It isn’t just sweet stuff as you’d expect from the name. Our starters came out, we all had something different. Let me tell you that the portion sizes are huge and the starters could definitely fill you up so if you plan to have more than one course, consider your choices carefully.

I had the most amazing potato Totchos which are fried tator tots, spicy green chili, crispy pork belly, andouille-sausage cheddar-cheese sauce. They are divine and I desperately want to cook something similar for here. Hubby had Pork Belly Sliders and my Mum ordered Classic Mediterranean Hummus with crisp bread.

I had asked from the children’s meals to come out at the same time as our starters. This is a great tip when dining with children. It keeps them occupied and fills their tummies. Plus, children eat so slowly!

We ordered pizza, burger and a tuna sandwich for the girls to share and eat bits of each. The pizza went down much better than the tuna sandwich but Freya really enjoyed the mini burgers. Toothsome Chocolate Emporium fries are absolutely delicious!

Our tummies were already very full and I had barely even made a dent in my own starters when the main course came out. I had chosen to go with the BBQ Chicken Flatbread which was delicious, with a side of fries. My Mum had The Croque Monsieur which was ham, Gruyere cheese, French loaf toasted, grilled, topped with bechamel sauce. Hubby had another burger, the Cheddar Bacon Burger. The restaurant is quite dark and the lighting is a little odd. It makes you feel sleepy especially when you are full to the brim with delicious food. Just like three years ago, the Robot Jacques came by the table for a visit. He’s great and also the owner of the emporium Penelope wanders around every now and again too.

We finished our meal with the signature milkshakes. They are huge and depending on which one you picked, they come with full sized treats on the top. My Mum picked the cookie jar, I had the brownie and Hubby had the marshmallow crisp. We all obviously had eyes bigger than our bellies but the brilliant thing about it, the milkshakes come inside a souvenir cup. After our meal we headed out onto the Universal City Walk. The sun was beginning to set and it had this beautiful glow along the river. We decided to sit on the steps and watch for a while whilst we all attempted to devour the milkshakes. It was one of those moments when you really can’t fit anything else inside your stomach but you desperately want more because they are so yummy. It’s safe to say we all felt a little sick. End our wonderful day on the City Walk was dreamy. Universal is my favourite place on earth and I wish I could bottle up those happy feelings and keep them forever.

I filmed our day of course, which you can view here. Please don’t forget to head over there to subscribe to me for free because we are so close to 2,000 subscribers now. Disclosure: This is a collaborative post. Our entrance to Volcano Bay, stay at Cabana Bay and food at Toothsome was gifted.