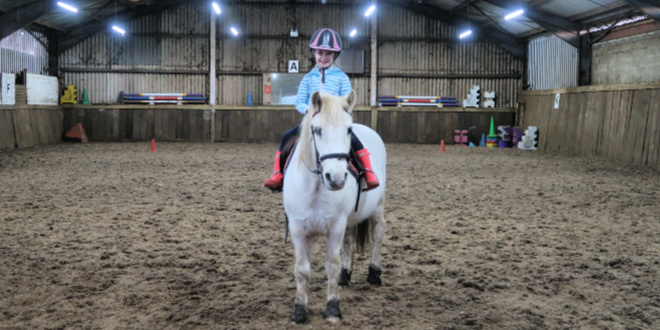 Getting Back In The Saddle

On her fourth birthday Eva started horse riding for the first time. She took to it like a duck to water, it felt very nostalgic as I used to ride when I was younger. I think she rode weekly-ish for about 18 months before we made the decision to take a break.

It was always meant to be a break, Eva wasn’t enjoying riding in the winter weather and had begun to moan a little whenever we told her it was horse riding day. As much as I’d like to be one of those competitive parents that push their kid to stick at things they start, I genuinely think it’s really important to make sure your child is always enjoying their hobbies. So we took a break.

I hoped it would always be just a break but she never really mentioned the riding until the end of last year, so she’d had probably a year break. Then we had an email from a more local riding school that we had put Eva on the waiting list long before she’d started riding at the previous place. They had a space for her!

We discussed horse riding with Eva and that this new riding school had an indoor school. She seemed enthusiastic about starting again. So we quickly accepted the space and Eva got back on that saddle 9 weeks ago.

She was really worried that she would have forgotten all that she’d learnt, but actually I think the break and the fact she is older has made her return even better than before! After just two weeks she had started doing little jumps with her pony Smokey.

This new school is brilliant and we are so happy. I wanted to share just a couple of snaps from her second lesson back on the saddle as a way of documenting her return to horse riding.