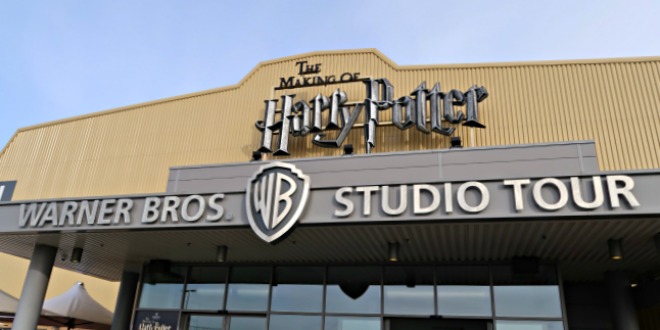 When we were in Orlando we got to visit The Wizarding World Of Harry Potter. It meant so,etching to Hubby and me but for the girls, they had absolutely no clue. P1 asked questions but I’d always felt she was a little young for the Harry Potter films. Then a few months later she was invited to a Harry Potter themed sleepover party and was entered into the wizarding world. She was then hooked from that moment on. I knew that P1 would love heading to the Warner Bros Studio Tour London The Making Of Harry Potter and was super excited when we were invited along. I arrange for the other two girls to go for a weekend with my Mum so that we could focus on just P1. My Grandad also came along for the trip too. The journey took about an hour from our house, it’s pretty much half way around the other side of the M25 and literally just off of it. Immediately you are greeted by a huge car park in front of two really large pale buildings with huge Harry Potter posters. P1 had fallen asleep on the journey, but instantly woke up talking very quickly about the Voldemort picture. We had arrived slightly earlier than the scheduled time, we queued for our tickets and then joined the security queue. It was quite busy as it was Sunday morning but I did notice that the queue was continuously moving and the staff were super friendly. P1 was given a “Passport” that had little activities for kids to do on the way round. We were actually put through to queue jump so missed the bit with Harry’s under the stairs cupboard. We were let into a darkened room slightly ahead of the crowd and then a little discussion went ahead about the dos and don’ts of the tour. We were then able to listen to the producers/directors explain how Harry Potter became a film. We were them lead into a cinema ready to watch further explanations only this time from the three main characters themselves; Harry, Ron and Hermione. I found these so interesting and instantly felt even more excited about the tour ahead of us. When the film finished, the screen lifted to expose the actual Great Hall doors. Everything in the tour is the actual thing from the filming productions. The Great Hall had been there for ten years and it was incredible. Once you re watch all the movies you really can see just how much is centres in that one room. It can apparently fit 400 production team and cast which is just incredible. Along the sides you can see the costumes and all the props on the tables. It was phenomenal. The tour guide explained and told a few secrets about the filming and the Great Hall. The tour works in a one way direction. You get an initial talk in the Hall but then you are left to wander by yourself. However, you can’t turn back on yourself so I must stress that you need to take things slowly. I was told that prior to our visit by a few friends who had been before. There’s so much to see, read and listen to as you walk around. The tour is set in two film stages; J and K. It was so surreal knowing that a few years ago this would have been filled with crew, cameras and actors. As we walked round I made sure we stopped at every tiny bit. I read the brilliant notice boards which gave further insight into the behind the scenes of Harry Potter production. We lost my Grandad pretty early on in the tour as he is known for wandering off. I wasn’t too worried as I knew I wanted to make the most of our trip. P1 didn’t seem that interested at first, she kept asking to move on but as things became familiar to her, her attention was captured and she started asking questions. Despite it being pretty busy, although a member of staff had told me that this was average for a Saturday, it didn’t feel overcrowded. The flow of guests was always moving and I think that’s what makes the timed slots of entry a really good thing. We were told the average length of the tour would be about three and a half hours. I wasn’t sure if that felt long enough before we had entered. The entire tour is super disabled and park friendly, there are toilets dotted about and everywhere is very clean. As you wander round you are able to see the boys dormitory, the Gryffindor common room, Hagrid’s hut, Professor Dumbledore’s office and other really iconic parts of the Harry Potter films. As you walk round there are boards with information, there are also some screens with the actors telling you things too. It was all very thought out and gave me a whole new love for Harry Potter that I didn’t thing I had. P1 was really excited to see the Hogwarts Express. We’d been on the Universal Orlando Resort version but this was the actual train used so that was obviously really exciting for all of us. The train station was a huge space. There was areas where you had to guess the suitcases and you could pose in front of the trolley. P1 really liked this area, I could tell by her happy expressions. There’s a little gift shop here too which marks the half way pint of the tour. Somehow P1 managed to persuade her Great-Grandad for a collectible wand which was rather expensive (£29). She took a while trying to pick her favourite one from the characters and ended up choosing Hermione Granger. As you walk out of the train station and round the corner is where the Backlot Cafe is. There’s also a Studio Cafe right at the start in the main entrance area but you are not allowed to eat or drink in the tour, so bear this in mind. We bought two children’s chicken Goujon meals, two burgers and a Butterbeer. I can’t say I was too impressed by the Butterbeer and probably would have preferred the ice cream option. However, the food was really delicious and very filling. The prices were obviously high, but completely reasonable considering. Straight out of the Backlot Cafe is a little outdoor space. There’s also a smoking area here for those who might be interested in that (we don’t smoke). You are greeted by the big triple-decker Knight Bus, Privet Drive home to the Dursleys, Potters Cottage and the wonky bridge. You can also find the real chess pieces used which I think is extraordinary, they are huge! We were really lucky as Privet Drive was open the day we went, so we got to peek inside. I was totally surprised that when you looked up the stairs there was just scaffolding. You sort of forget you’re wandering in a film set. I found the next part of the tour super interesting. You wander through into a bit of a workshop where there’s the goblin faces, the darker more evil creatures and all the different robotics. P1 was fascinated by the cabinet that had Hedwig the owl, the scary book and “baby” Voldemort as she calls it. She spent quite a while just pressing the buttons to watch them move. She also has the chance to control Dobby by her movements. I definitely think my eyes were opened at this point as I realised just how much of Harry Potter is actually not entirely real. Including some of the shots of Hagrid!! You next take a wander into the real life Diagon Alley. We obviously got to experience a full size one in Orlando where you could actually enter the shops. P1 was adamant that she thought this one was much better but I wasn’t sure. I think I might have felt better about it if the lights were brighter. It was quite funny seeing how many people were taking selfies or even going on Facebook live in this area. Oh yes, there’s free wifi throughout the tour. Perfect for a blogger like myself. The tour then moves round to a room full of building designs. I immediately said “wow” in this room. I honestly hadn’t even thought about the need to draw out sets when you make a movie. Then we entered a room with miniature models of each set or room. I just don’t have the words to describe this part of it. P1 spent a long time in this bit, it was close up so she could see inside it all. She loved the owlery and Hagrids hut the best. The very last part of the tour, if you don’t count being exited into a gigantic gift shop, is the huge model of Hogwarts itself. It was breath-taking. My Grandad and Hubby seemed super interested that it takes a team of twenty people to maintain this model, even now that filming is over. They used this model for a lot of their aerial shots of the castle. It was so big! We had the best day. It was nice to see a different side to P1, who had behaved so grown up the entire day. I definitely think we all needed to have some one on one time to focus on her. It must be pretty difficult to be a big sister to two. I have found a whole new appreciation for film making. I just can’t believe they had to make every single tapestry, painting, food item, costume and obviously there’s all the special effects too. It’s great that they’ve allowed the public to get this personal viewing too. I filmed our day out and I hope you enjoy it!

This is a wonderful day out for all Harry Potter films or even just film fanatics that want to learn more.