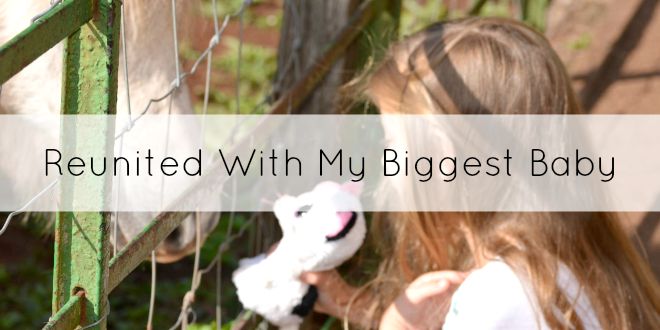 After nine very long days without P1, at 6pm tonight I picked her up from the usual location and took her home to be reunited as a family. She was ladened with gifts for P2, P3 and even hubby and I were shocked to receive a present each.

I woke up this morning with such a strange feeling. It was like a countdown was on. I had excitement and fear. This past week has been honestly so easy in the terms of parenting. I can definitely cope, with the odd wobble of course, with just two children to look after. Bedtimes, meal times, play and entertaining have all been pretty simple because a 10 month old and a 2 and a half year old are actually quite easy to figure out. Our routines changed this week and I have gotten used to it. The fear of it changing was so overwhelming as 6pm drew near. Not having P1 around has made me feel incomplete. She’s such an interesting person to talk to and when I get the time to spend with just her it’s so wonderful. She’s also a big help with her sisters and with housework. I missed her. Of course I did and I’m sure I’m not alone in saying that although I missed her, it was actually quite nice to have the break.

The look on P2s face as she saw her big sister bound in through the door nearly made me cry. I knew she’d missed her but it wasn’t until the moment that I could really appreciate just how much. They hugged each other and P1 was so excited to show her all the amazing Peppa Pig gifts that she had chosen for her little sister. It was such a magical moment and P2 kept saying “I’m so lucky” and “thank you. I missed you”.

P3 woke up due to all the noise and joined her sisters downstairs. She looked very confused at first. She clearly couldn’t remember her biggest sister and it was very interesting to see the way she reacted. I had expected her excited face but instead it was cautious. P1 didn’t exactly give P3 a chance to remember slowly, the poor baby was showered with cuddles and kisses which eased P3 back into her sister quite quickly.

All evening they’ve all been playing so good. The odd wobble as they need time to adjust back to each other. I’ve stayed patient with them and the whole evening has been so calm and completely different to our old “normal”. But the part I was dreading most arrived, much later than normal, bedtime! Things went completely to pot. We read a story together and did the usual stuff related to bedtime. But then excuses and talking and getting out of bed happened.

P2 has been an angel all week at bedtime. Straight into bed and not another word until her usual waking in the nights. But tonight she was in and out of bed just as much as P1. The weather probably hasn’t helped. I made the quick decision to use this disruption to start the only one-milk-at-bedtime-and-no-more-until-morning thing. So we had shouting and crying for about 15 minutes before she gave in and has gone to sleep.

It’s nearly 10pm as I’m writing this. I’m laying on the bed practically hanging out of the window in a bid to get some sort of breeze in this ridiculously hot weather. I can hear P3 wriggling around and drinking her milk from her cot. There’s no more noise coming from P1 and P2s bedroom so I’m hoping that’s the sign of two snoring children. Despite the disrupted bedtime which I definitely expected as P1 tests and adjusts to the “old” normal, I am really looking forward to being our completed family again tomorrow. We have a little Tesco shopping trip planned, the park and a mini feast!